It’s hard to imagine that a 56-year-old man who swims, plays golf, works out, and even 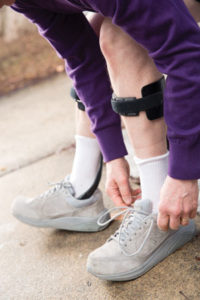 practices yoga has Charcot-Marie-Tooth disease (CMT). But Jeff Seitzer, who was diagnosed more than 40 years ago, has managed to keep his symptoms at bay. He believes staying fit and flexible has been the key to maintaining his active lifestyle.

In fact, Seitzer says he noticed an increase in his stamina and energy level when he started attending yoga classes about 10 years ago. At home, he also stretches “maniacally,” and has noticed that his legs stiffen up when he doesn’t both stretch and exercise regularly.

Seitzer was about 13 years old when he was diagnosed with CMTX, which is typically associated with more severe symptoms in men than women due to its linkage to the X chromosome. Clinically, CMTX is similar to the more prevalent CMT1 subtype; common symptoms include muscle weakness and atrophy, and loss of feeling in the feet, lower legs, and hands.

Seitzer only has mild symptoms, which include foot drop, weakness, and pain in his legs and feet at times. Even his doctors at the CMT Clinic at the University of Iowa in Iowa City can’t believe how much he can still do.

“By my age, I should be hobbled,” Seitzer said.

Born in Omaha, NE, Seitzer now lives in Chicago with his wife, Janet Smith, and 8-year-old daughter, Penelope (who is adopted and therefore not at risk of inheriting CMT from Seitzer). The University of Chicago alum teaches religion and philosophy at Roosevelt University in downtown Chicago and often rides his bicycle to work. To help ease pain and extend his stride when walking, Seitzer has been wearing Kinetic Research’s Noodle AFOs (ankle foot orthoses) since 2014. Before that, he tried other types of orthotic devices, but he says the Noodle AFOs are a major step up for him. For example, they are particularly useful when wearing winter boots to walk on ice and in snow, as they help to improve his stability.

“They are a game changer,” he said.

Seitzer also said the Noodle offers support during other activities, like riding his bike. For instance, he said, when wearing the AFOs he can ride his bike without needing to stretch first. Also, the Noodle’s carbon fiber foot plate almost acts as a “biking shoe,” helping distribute his weight more evenly on the pedals.

If Seitzer had his Noodle AFOs 40 years ago, they might have saved him some 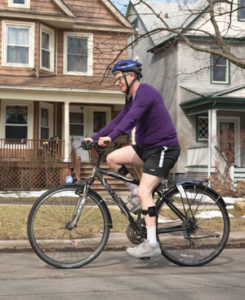 embarrassment, too. That’s because, as a teenager, he wore metal braces. At the time, Seitzer’s mother, who also had CMT, thought she was doing the best thing for him. She didn’t want him to end up like her father, who had a severe case of the disorder. As a result, Seitzer wore the awkward braces until he was about 20!

“They were not so great for those teenage years,” he recalled.

Seitzer’s mother was also hyper-vigilant about curbing the progression of her son’s CMT for another reason: At the age of four, he suffered from a major bout of encephalitis, which left him temporarily paralyzed on his right side. Other residual side effects left Seitzer with extreme nervous energy, memory loss, and mood swings. He also had reconstructive surgery on his right foot, which was malaligned and weakened by the encephalitis.

“It was devastating,” he said.

Read More Of The Article
Go to Top